Posted in Special Collections and Resources

How will Kisilu Musya, a farmer in rural Kenya, cope with drought and flash floods brought on by climate change? Can a Black community in Texas put an end to toxic emissions from a nearby oil refinery? How can we protect forests, rebuild ecosystems and restore biodiversity? What is the real cost of fast fashion and iphones? These questions and more are explored in this documentary collection.

The global future we face is both exciting and challenging. Rapidly changing landscapes of regional and global systems of power, knowledge, and exchange confront us all — probably in ways we have yet to fully comprehend. From this global perspective, the need for environmental literacy intertwined with various other kinds of understanding is deep and profound.

The session includes numerous clips from Global Environmental Justice Documentaries to give viewers a sense of the scope and depth of the collection, as well as recorded interviews with the project’s curators.

Download the teacher’s guide for Thank You for the Rain and others here: http://gej.docuseek2.com/cart/template/guides

“Capturing ecological, social, and public health crises, these documenta­ries bring the neglected stories of marginalized communities to light.
…the films are insightful and will enhance students’ environmental literacy and inspire advocacy through artistic film imagery and authentic human stories.”  — ccAdvisor 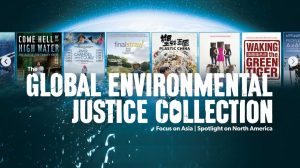